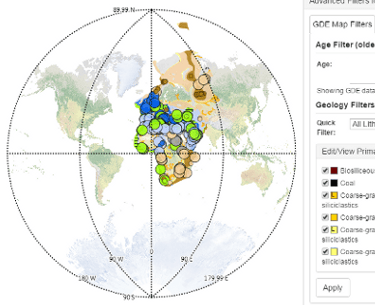 Dear All,
First of all this is going to be a long blog post, so be prepared. We are going to talk about the work we are doing to create the new version of our webmapping open source product, MapStore. Although the product is not ready to be released there is quite some good experience that we can share so we thought it was already worth sharing it on our blog.

Btw, if you are like me and prefer pictures over words skip at the end of the post to see some action!

MapStore 1.x: the ugly, the bad and the good

MapStore 1.x is a nice WebGis framework due to its pluggable architecture, and its coherent and familiar look & feel.
Unfortunately its pillars (OpenLayers and ExtJS) represents both its strength and its weakness. From them MapStore inherited the ease of extension and many powerful widgets, but also the difficulty to progressively evolve to embrace new emerging needs, for example a more modern look & feel and new features coming from newer mapping libraries.

MapStore was built using a monolithic approach, fully depending on ExtJS for the look & feel and the application infrastructure, and also strictly bound to OpenLayers for the mapping capabilities, through the adoption of GeoExt and gxp as an additional layer of dependency. Eventually we were at a point where we could not think to plan any important improvement without rethinking the overall MapStore architecture from the ground.

We had two alternatives: remain in the comfort zone and upgrade MapStore to new versions of ExtJS (6.0) and OpenLayers (3), eventually contributing to the GeoExt project to support them, or take the risk to choose a new set of technologies and build a completely new version of MapStore based on them. This forced us to get out of the cretaceous era of web development and discover a new world that was emerging around us.

Emerging trends in the JavaScript world

The world of web development (especially client-side based on Javascript) got a tremendous drift in the last two years, mainly due to some new frameworks that are replacing the old ones and a refreshed version of the language that has been made standard with the name of ES6 (or ES2015).

A quick history of (modern) Javascript libraries and frameworks can be the following:

In the meantime, also the Javascript language was changing. First of all, thanks to NodeJS it is not limited to the browser anymore. Then, the language is rapidly evolving with new standards, like the already approved ES6 and the upcoming ES7. Also several ways to handle modules and dependencies are available (UMD, CommonJS, ES6 modules).
Finally, thanks to transpilers (expecially Babel) you don’t have to wait for browsers to implement the standards anymore, you can start using them today. You can also use other languages that can be compiled to Javascript (e.g. Typescript). At the end, Javascript and expecially ES5 is rapidly becoming the assembly of the web.

On the side, a new set of tools is now available that mimic the functionalities of our beloved Java server-side tools for code and project management:

MapStore 2: A Pinch of This, A Handful of That

We had to decide what to do with the next MapStore version and definitely, there was a lot to choose from.

Moving onto using newer versions of ExtJS and GeoExt was a no go from the beginning: we have been hurt enough already by the monolithic approach of ExtJS, and we wanted a simpler solution.
The world of web development is looking for more simplicity to handle complexity (whether this has been achieved or not is hard to say though…). We were looking for smaller libraries with a specific purpose that could be replaced with a smaller effort than the full ExtJS. We were also trying not to choose a single mapping library for any possible application.

The world of web development is rapidly moving, but we had to take a decision: we had to choose something that was not going (at least in our hopes) away in a couple of years, and if it did, we could plan the switch in steps, instead of throwing everything away like we are doing now.

Both AngularJS and EmberJS seemed too fast moving targets, with upcoming, revolutionary, 2.x versions at the door, and the underlying complexity of AngularJS was a little bit intimidating to us. ReactJS, on the other side was simple enough and didn’t take care of the overall application, concentrating on the view aspect, through the composition of small components.
We could choose ReactJS and use something else for other parts of the application: data flow, state management, web services interaction, etc.

We also didn’t want to choose a single mapping library, but rather trying to be compatible at least with OpenLayers 3 and LeafletJS leaving room for the integration of other libraries in the future. The component architecture of ReactJS allows this, by building interchangeable components, abstracting the underlying mapping implementation. So, the choice was to choose as little as possible, at least from the beginning.

It was also important to us that the components depending strictly on the underlying mapping library were taken to the bare minimum (mostly the Map component(s)) in order to limit the coupling with it.

When the first components were ready, we needed to build a little bit of infrastructure, and we started choosing from one of the several implementations of Flux (the one-way-dataflow architecture backed by Facebook). First of all, did we need Flux? For sure we needed something to write the glue code that could made the ReactJS components communicate.

In that precise moment a new library was emerging from the crowd of Flux implementations. Its name is Redux, and it’s not a ReactJS only technology.
Redux is about simplifying state management through a set of principles:

It looked like the perfect match for our need of simplicity, so we adopted it right away, adding actions, reducers and a store to our components, so that they could be made into a real application, and our first examples were born.

For MapStore 2 we wanted to focus on superior quality for the code with respect to the previous version. This basically meant:

Have a look at the project on GitHub. We are open to suggestions for improvement…

MapStore 2: we are almost there…

Ok, enough talking let’s see some pictures to show what we have done so far. The code is Open Source (License is Simplified BSD) and is available on GitHub. The current demo page is here and the continuous build and deploy with Jenkins is here. Let’s dig a little into the various widgets and components.

We have built a minimal viewer application with a set of widgets for both LeafletJS and OpenLayers 3 (can you spot the difference?). 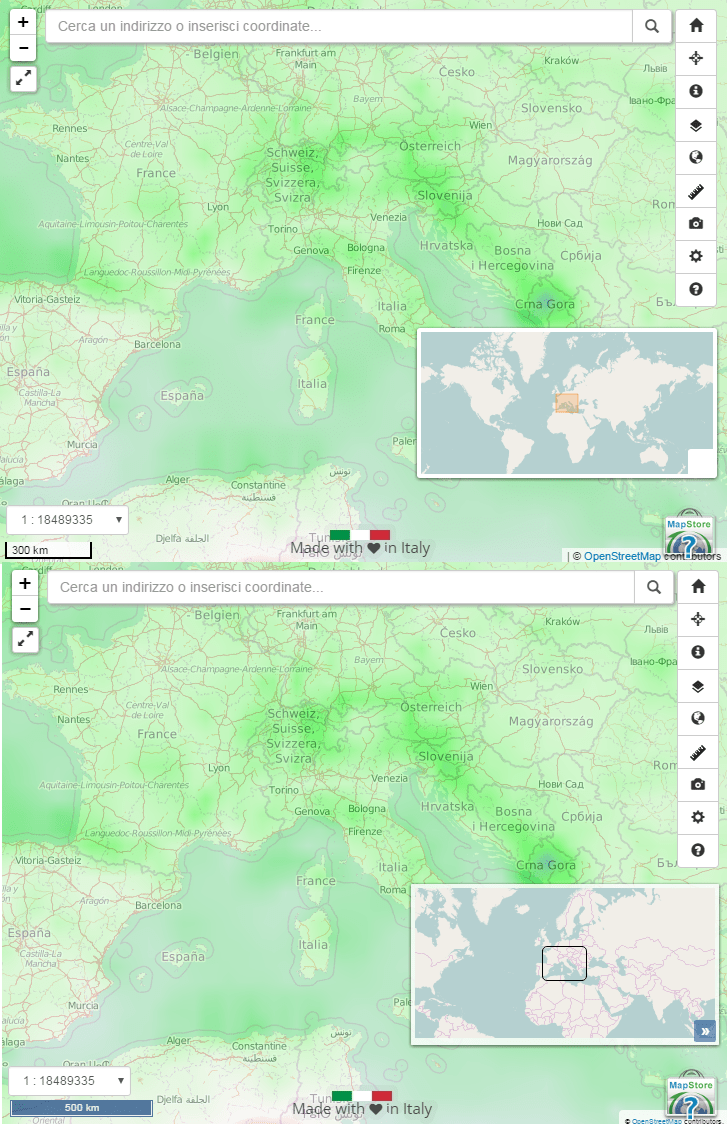 We have experimented with a specific layout for mobile, that kicks-in automatically when the application is used from a mobile device. 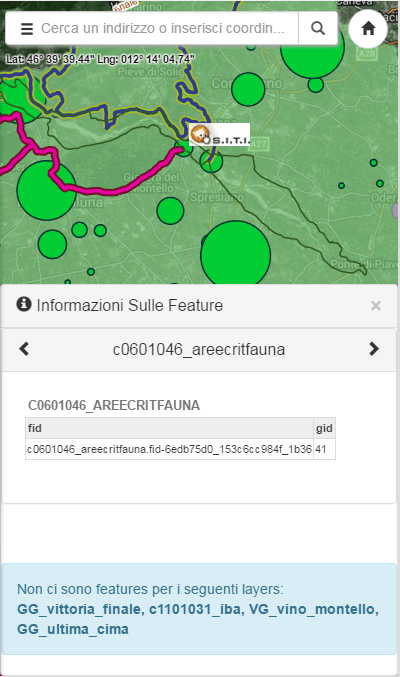 We have built a 3D viewer based on CesiumJS. 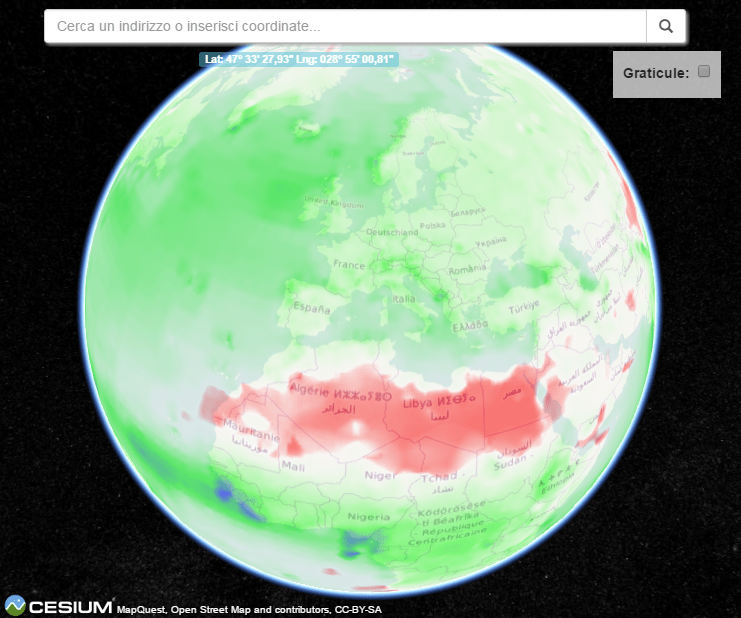 We have created a full set of basic components like: LocateMe, IdentifyOnMap, TableOfContents, BackgroundSwitcher, Measure, Snapshot (and more are coming). 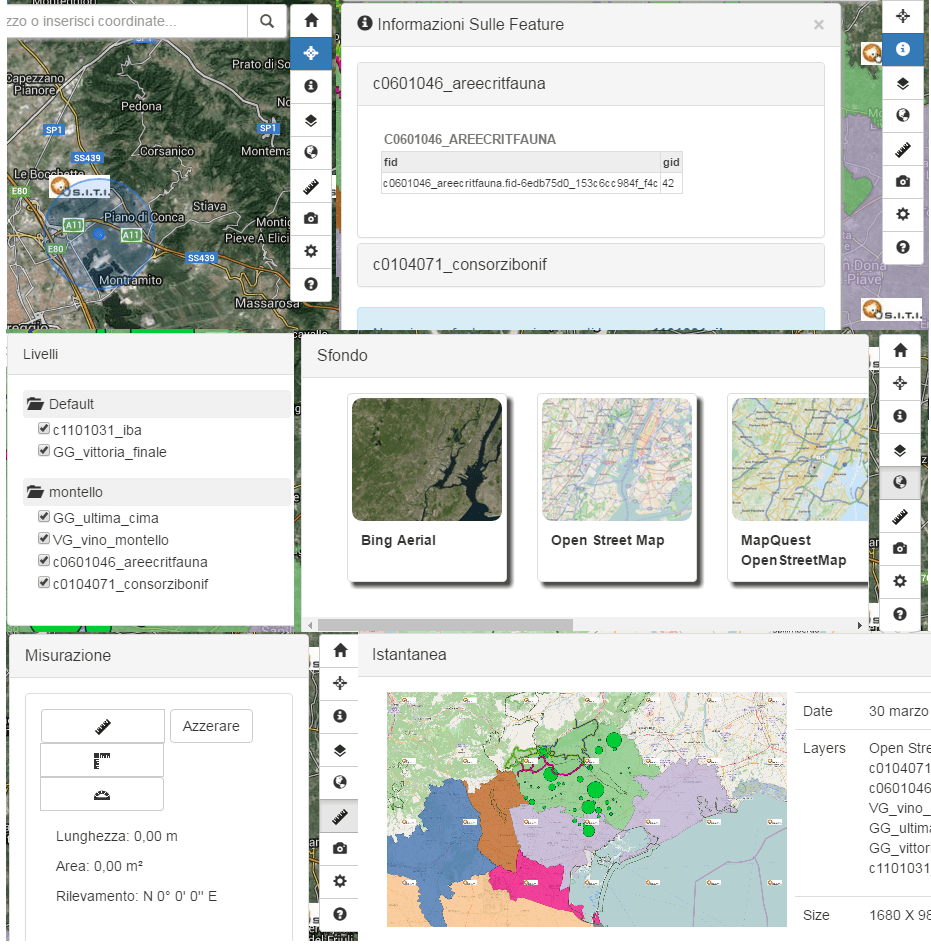 We have built data filtering and visualization components like the QueryBuilder and the FeatureGrid. 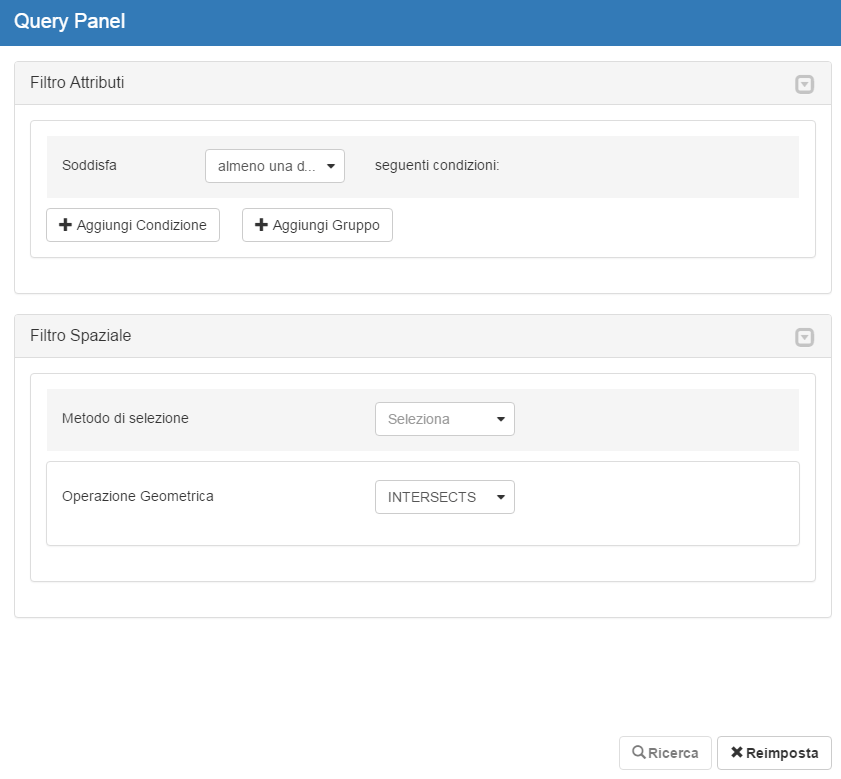 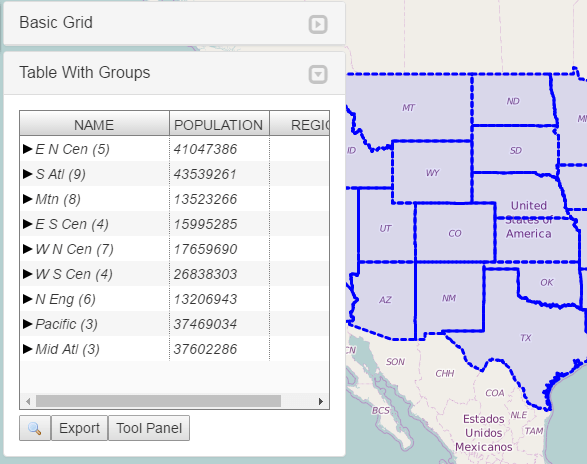 We have also implemented a JSX based templating system for advanced data viewing. 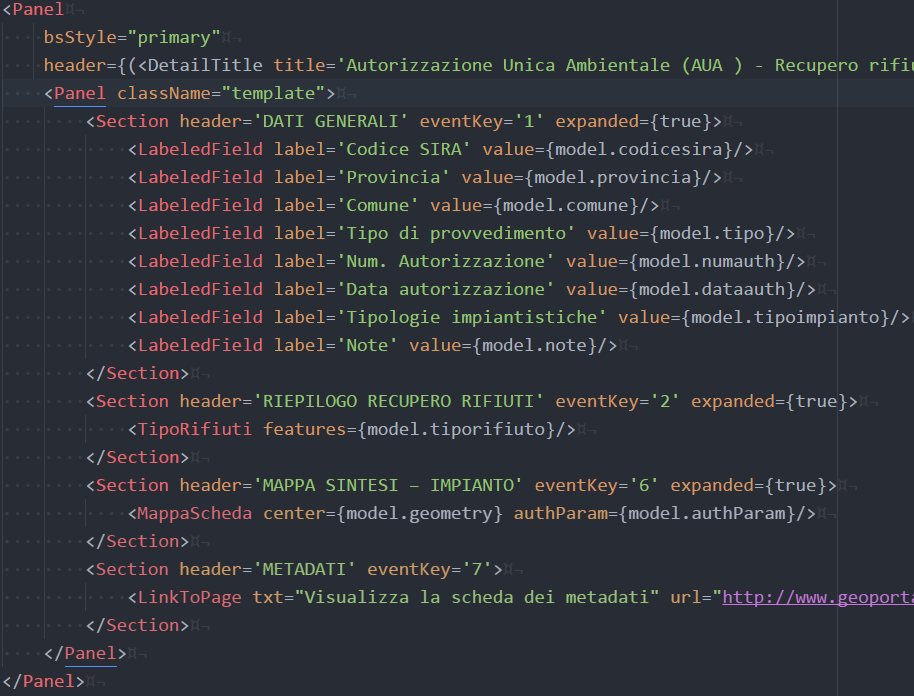 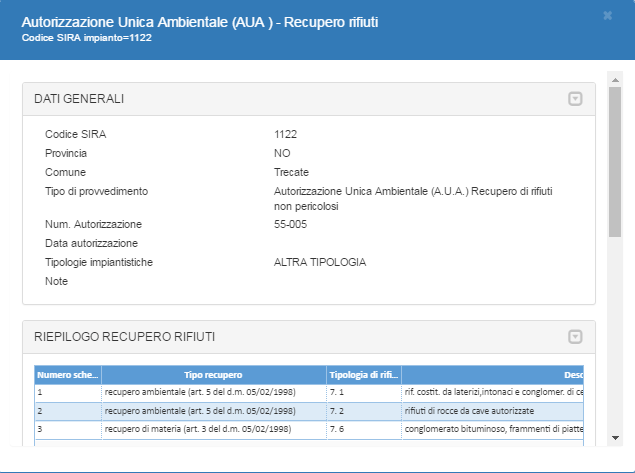 As an example we have recently migrated an application based on ExtJS and OpenLayers 2 (see pictures below) to show geological and other kind of data with a powerful timeslider functionality and support for many different coordinate systems (also polar ones). The application is a clear example of the level of customization MapStore 2 allows with relative ease (the customer explicitly asked to mimic the L&F of the old application in many places). 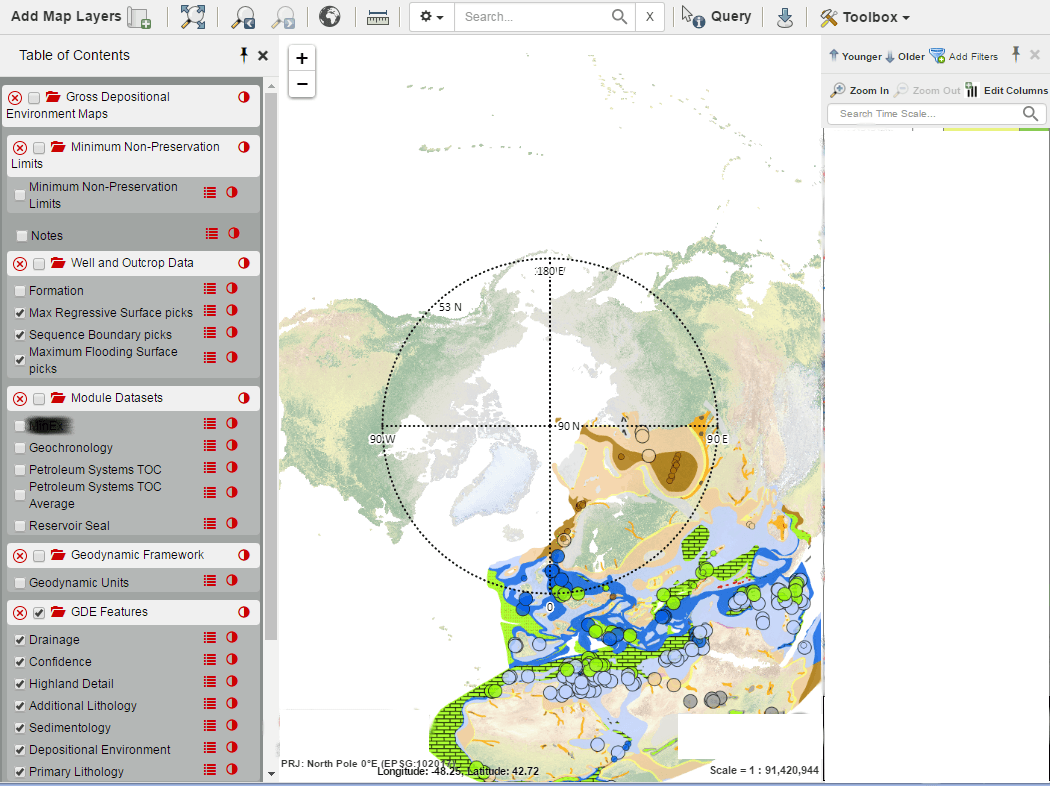 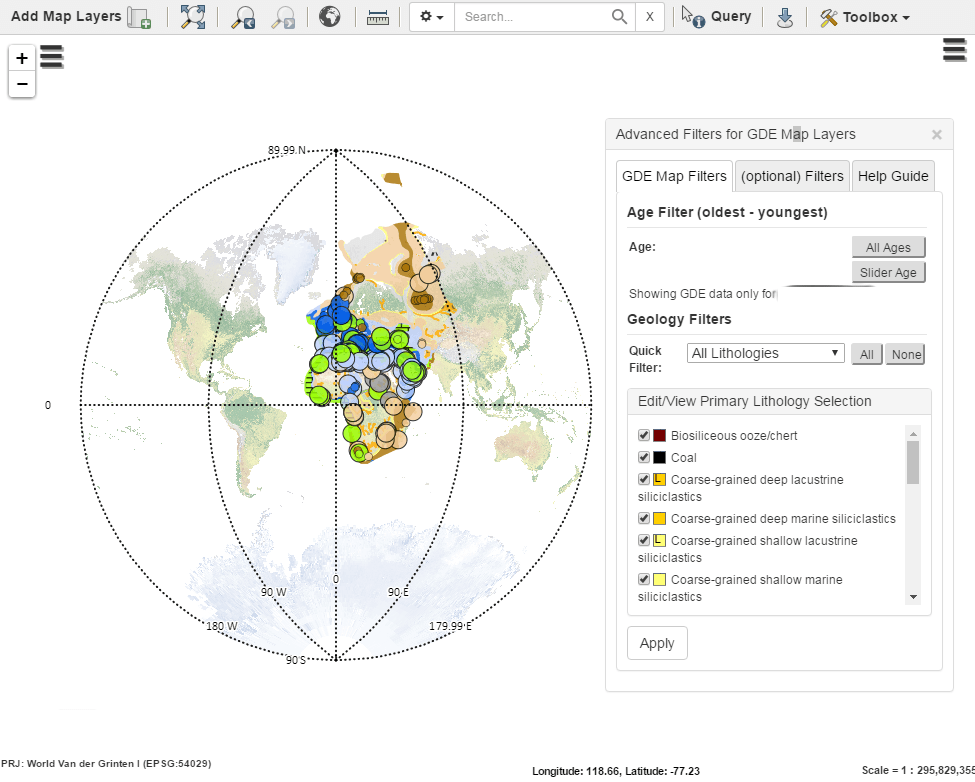 For another client, we are building a configurable system to query (spatial) data published as complex features on GeoServer (through the app-schema extension), using OGC protocols (WMS and WFS). The system leverages the already mentioned data visualization tools available in MapStore 2, in particular the QueryBuilder, the FeatureGrid and the JSX based templating system.

During this journey we have already learned a lot of stuff; we learned something good:

We also learned something bad:

However, the MapStore 2 journey is not finished yet, there is still some work ahead of us to have a full replacement of MapStore 1 and we are targeting end of May 2016 for a first release.

In addition, right now the look & feel is still a bit thrown together and the usability needs some love: we are working on this with a specialized partner as we want a captivating and easy to ise user interface for MapStore 2.

It is worth to point out that some of the work mentioned in this post has been performed under the umbrella of our GeoSolutions Enterprise Support Services offer.

If you want to know more about how we can help your organization, don’t hesitate and get in touch with us! Make sure to check our Enterprise Services Offer which has been used to complete the work described in this post.