Ciao a tutti,
we hope everybody had nice seasonal holidays and is back fresh and ready to move on with another year of activity.

In this blog we’d like to present some of the work we have been doing in recent time to improve GeoTools and GeoServer raster reprojection abilities.

Raster reprojection is a quite heavy process in which every single pixel of the original image has to be mapped into a new position in the target raster. Here is a visual representation of a small set of pixels, before and after the reprojection (in this case, from WGS84 to polar stereographic): 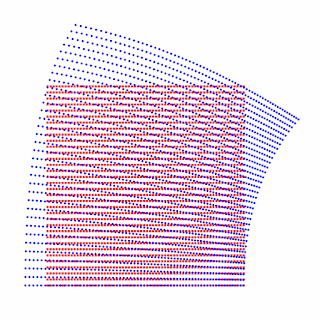 A point by point reprojection is obviously taking quite a toll, a screen sized image has easily well over one million pixels to reproject, much more than the number of vertices one can find in the common vector map. To make things worse, the transformation to be used often involves trigonometric functions and other complex mathematical tools that visibly slow down the calculation.

The reprojection algorithm used by GeoServer and GeoTools until now worked exactly like that, it used a very accurate but also very slow approach.

If the area gets larger a single affine transformation would not be good enough anymore, but we could use many of them to fit different areas of the raster.

Have a look at the following one dimensional representation to get the gist of the idea (this is known as piecewise linear function): 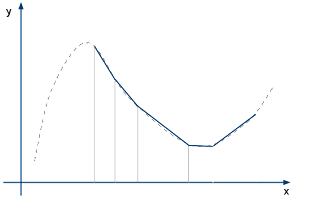 The trick to apply this approach if finding out where and how much to subdivide the original area into discrete pieces that can use a single affine transform: to do so we devised a simple error estimation method that proved to work well with all common map projections.

So we start by evaluating the linear transformation error over the entire raster area, if it’s larger than a certain target we split the area and evaluate again, and recurse this way until the approximation error has been put under control.

The optimized method proved to be quite effective, drastically reducing the time it takes to reproject a raster. We made some tests with GeoServer using the same data and the same reprojection test used in the FOSS4G 2010 WMS shootout measuring a six times speedup: 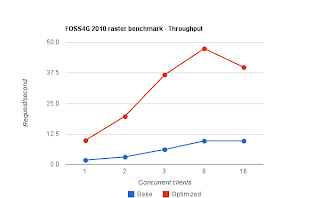 We also compared the images generated by the original and optimized method finding there was hardly any human noticeable difference, and very little difference that could be machine detected at all.

For all of you that want to dig into the nitty-gritty details, we have a full tech report that you can inspect.

There is still plenty that can be done to optimize further raster data reading and in memory transformations to reach even higher performance and scalability. Interested? Let us know!