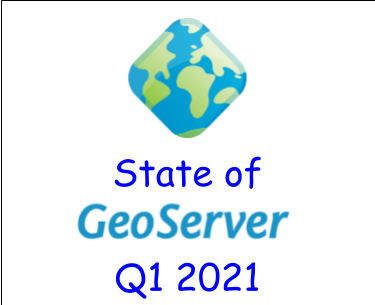 GeoServer keeps advancing with a great support from the community and the trust that organizations are putting in one of the most  popular open source tools to publish geospatial data. We, at GeoSolutions, are very fortunate to have in our team key code contributors, as well as, customers that support the advancement of GeoServer for the greater benefit of the geospatial community. Version 2.18 was released some months ago (see official blog) and the new release, 2.19 is, coming in the next month. This blog highlights the new functionalities and provides the information for our next webinar on February 3rd where you can learn more about these releases an interact with the lead GeoServer developer, Andre Aime.

Save time when experimenting with different configurations

A new button “Apply” allows to make changes in the admin interface, apply them and test them, leaving the window open to iterate editing and reviewing the changes. The save button closes the window. This new functionality saves time when experimenting with  various configurations. GeoServer relies on Jiffle, which is a scripting language, part of the JAITools project, used to create and analyze raster images. GeoServer, since 2.18, supports multi-band outputs. This will allow to e.g. analyze the changes in time on a region of interest (assuming image mosaic with time dimension) and display the differences using one single WMS request. The image bellow shows an example result where red indicates negative changes and green indicates positive changes. The Goode’s interrupted Homolosine is a composite map projection used for displaying world maps and normally presented with multiple interruptions. Every cell has an equal area making it useful for presenting spatial distribution of phenomena. GeoServer, not only supports the projection, but also provides the advanced capability to handle on the fly any source and perform the data slicing. So, one can bring, e.g.  OSM land masses  and  without any particular preparation obtain the following:

GeoServer continues to improve support for the dynamic expressions of MBStyles  allowing both feature attributes and “camera” information  (e.g. zoom level) to be included. The GeoPackage community module has significantly advanced in terms of performance and outputs.

The main new capability, that I want to highlight, is the advancement of the support for “Cloud Optimized GeoTIFF (COG)” stores. In  GeoServer 2.19, the community module enables easy configuration.to connect GeoServer to an AWS S3 bucket with COG images, configure the mosaic HTTP GET range read requests, and more. During the webinar we’ll introduce you to new advancements as well, such as more GeoPackage extensions support, and Discrete Global Grid Systems support.

We cordially invite you to join the webinar on Wednesday Feb 3rd  at 11:00 EDT / 16:00 GMT (check more time zones), to learn more about this release and what will be coming in 2.19 from our GeoServer Technical Lead, Andrea Aime. We are planning to do 30 minutes presentation and 30 minutes of AAA (Ask Anything to Andrea) .  You can register by clicking on the button below.