GeoSolutions is pleased to announce that GeoServer has been upgraded from 2.0.2 to 2.0.3 (check the announcement for  2.0.3) on the Standing Cloud infrastructure. Notice that we have GeoServer 2.1 series on the radar for the next round of upgrades.

Between available cloud partners, we have:

GeoSolutions has joined the Partner Program of Standing Cloud and it is now listed as Solution Partner for GeoServer. We have worked with the Standing Cloud team to integrate GeoServer 2.0.3 in their application network, so that now people can install and deploy a GeoServer instance in less than 15 minutes with no system administration skills!

Just look at the screenshots below, in 10 minutes with a few clicks I have gone from nothing to having GeoServer running: 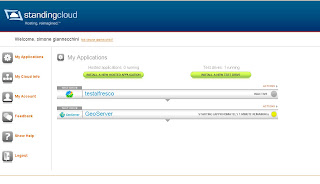 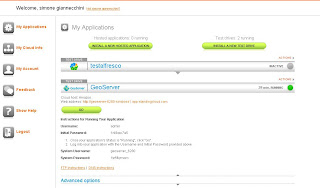 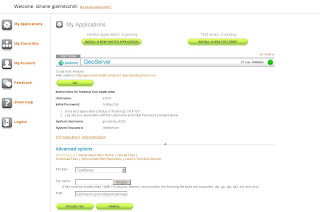 So log in and have fun with GeoServer in da cloud!