OpenDataNetwork.it: CKAN and GeoNetwork for an integrated Open Data Portal

Dear All,
we wanted to talk briefly about the OpenDataNetwork Project which is a joint project promoted by a few Public Administration located in the Italian Region of Tuscany, namely:
which have decided to create a federated infrastructure for the publication of their data (geospatial as well as alphanumeric) as OpenData.

The Project has drawn its essence from the experience accumulated during the C.E.R.C.O. project which aimed at creating a federated Spatial Data Infrastructure (SDI) for the dissemination of geospatial data as Open Data for a number of Public Administrations in the region of Tuscany. The goals and aims have been so far expanded to provide a single entry point for the dissemination and exploitation of Open Data both geospatial and alphanumeric. The project was co-funded by the Region of Tuscany.

GeoSolutions has provided technical support for the implementation and deployment of the infrastructure as well as for the training of the partners for the management and evolutions of the platform in use. The current version of the system can be found at the link below:

http://www.opendatanetwork.it/
and here below you can find a screenshot of the user interface. 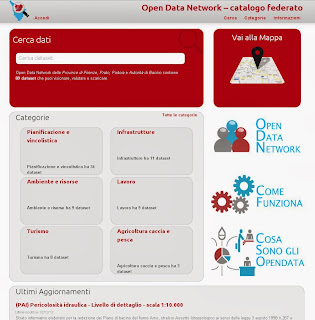 In terms of infrastructure and components, the overall infrastructure is depicted below, while the architecture for each single node is provided at the end of the post.
The goal of the federation is to allow each partner to deploy the components he would need to have a complete and ready-to-use infrastructure for the publication of data as Open Data relying on Open Source products and accounting for the possibility to reuse existing components (e.g. proprietary geospatial servers) in order to minimize the impact. The Central Hub would then harvest the information from each Partner’s Deployment (with particular care on avoiding cyclic graph in the harvesting set up) in order to act as the single entry point for the entire network. The possibility to have multiple hierarchical level is foreseen and actually possible to implement with no further development (e.g. a new County could join acting also as an Hub for its own cities which would not be harvested by the Central Hub).

The node Architecture puts together all the building blocks that a Partner could need to ingest and disseminate geospatial and alphanumeric data with particular emphasis on geospatial data. We also tried to use as much as possible existing standards for the interconnections in order to account for the possibility to swap some components with other similar ones. E.g. it would be possible to swap the catalog implementation from GeoNetwork to a different catalog providing it implemented the OGC CSW protocol. 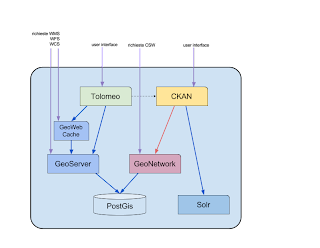 If you’d like to know more about what you could achieve with us, do not hesitate and get in touch with us. If you need professional services to get started with Open Source software make sure to have a look at our GeoSolutions Enterprise Services.